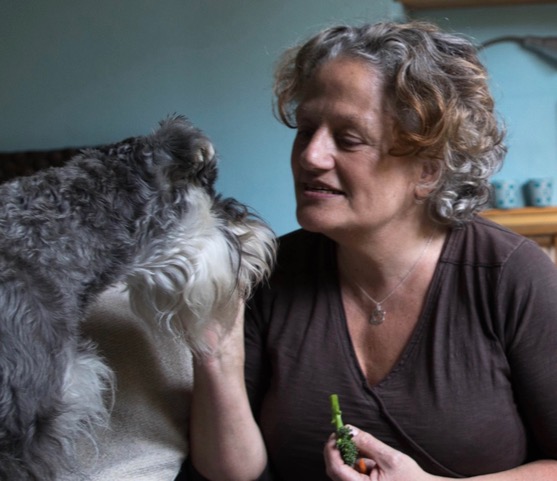 My hair is grey.

I return from my hairdresser having had the last bits of colour chopped out.  I’m now sporting a choppy, silver and pepper pot, topknot, not entirely dissimilar from my beloved dog.

I don’t fully understand the impulse to grow out the colour, which had me ditch the hair dye in April. I knew it was related to my sixtieth birthday, which is now a mere two weeks away. I wanted to see my hair. I had been using colour for fifteen years, ever since my hairline started to grey.

It wasn’t anything clichéd about aging and grey hair, that drove this. It hasn’t been comfortable at some points during the process, seeing the half in, half out thing going on, on a daily basis. Now I’m here. My hair is grey and I’m surprised by the strength of my feeling. Oh. I say to myself in the bathroom mirror. Hello.

I limp and lurch towards my ‘big birthday’ not only as a metaphor, but literally, as I’m long overdue for back surgery. Limping and lurching is what I do – though, my bulging discs notwithstanding – it is a blessed relief to understand that stumbling, staggering and lurching, is the human condition of our little lives. My own little life has become much sweeter, since giving up on getting life right.

The shoreline. The beginning of being old: to my way of seeing it, anyway. No, I am not the new forty. I am not still middle aged. I am averse to ageing euphemisms.

My mother died, just days after her sixtieth birthday. She was bitterness and sorrow as an art form, and I never really understood how that came to pass. I was on the other side of the world, caught up in my own version of sorrow and bewilderment. We were estranged for years. Her death coincided – although I wasn’t to know it for quite some time – with the death rattle of my addiction. No coincidence. I was so nearly dead myself, on my knees in the shadows of Sydney’s yellowest sun. My mother died and I stayed alive.

Thirty years ago: half my little life ago.  And, here I am with my grey hair, having somehow descended into tenderness. I wish my mother and I had had more time together, an opportunity to see if there was any other way to dance our dance. It was a brutal dance and I needed kindness like a desert landscape needs water. I nearly died of thirst. I believe that is exactly what she died of – she was latched on to the breast of death, and didn’t ever get to know there was another place to drink from.

Twenty years ago, when I was in therapy and starting to interpret past events, I went to the graveyard on the edge of Dartmoor where she’s buried and lay down on her grave. It was a pilgrimage of sorts, though I was making it up as I went along. I didn’t know what I was doing or why, but I managed to trust the imperative. If it were physically easier (those discs again), I’d go back there now to lie on the ground that holds her body. A mother and daughter, with a hundred and twenty years between them: thirty of them in this world at the same time.

This turning a new decade, it has some juice. As an exquisitely understated friend of mine would say – ‘it’s not nothing’.

I don’t have any recollection of reaching ten except for a tiny, waft of unease. Neither do I remember a twentieth birthday, which was undoubtedly due to drugs and alcohol. Turning thirty was the milestone of my life. I don’t remember anything at all with my conscious mind, but almost dead from self-hatred and drugs, I finally turned my face towards this human world.

Ten years later, I celebrated becoming forty around a table with friends. I had a profession: psychotherapy, and a partner. I was trying to force myself into an idea of myself and it was only a partial success.

By fifty, I had escaped the partial partnership and some internalized constraint. I had found and then lost again, the love of my life and the daughter we called in. I had a proper party with catering and dancing and wore a sea green dress. It seems so long ago.

With a light, yet serious touch, I’ve dedicated a few ritual acts of love and kindness towards this birthday. In May, I went on a pilgrimage to Hydra, the Greek island where Leonard Cohen lived, wrote and loved. More recently, I commissioned a photo shoot. At home with Leonard The Dog and Bebe The Cat. Family life. Love.

And, it was not nothing – to see the sweetness and comedy I live inside, from the outside.

I wonder what the next decade of me, and of this wailing world will be. I’m viewing my personal next decade through the lens of no real appetite for more than that. My sense of having the capacity for another ten years, but not much more, is clear as a mountain stream. No drama. Nothing complicated or ambivalent. Just its ring of truth. And, of course I know ideas, beliefs and passions change, so I’m not gripping on too tightly.

I am trusting my own precious heart. If this is my last decade, I’ll do the very best I can with it.

If you are wondering about why a person might ‘only have another decade to give or to live’, I can only say I’m very tired. I’ve been tired all my life. Living with depression is tiring. I’ve been dragging myself through the days of my life, and while I finally fell from the self-violence that came down through my mother’s line, into something like Grace, it will always be heavy. Dragging the heavy is wearing and I am worn.

The thing is, all of this is gentle. I did, eventually get home to that precious heart I mentioned. The fact that it took a long time, and that in many ways I’m ready to go now, just makes me smile. Maybe I’ll make it to seventy. Maybe I won’t. If I do, and still feel like this, I’ll be writing about ending my life. If I get to seventy and don’t feel like this, I’ll be writing about that instead.

Depression and weary aside, I know I don’t want to be old, old. Seventy feels doable. More than that feels dangerous. We don’t hold old age with compassion and respect in these broken systems of our government. I am crystal clear I don’t want to spend my last years in that system. Unequivocally not.

So, here I am, stumbling sweetly towards my sixtieth birthday, which incidentally I’m celebrating by going on a Death Retreat. I tell people, and they mostly grin at the perfect pitch of it. So very me, and so very lovely to be seen and understood in my deepest longings.

And here is your love
For all things.

And here is your love
For all of this

May everyone live,
And may everyone die.
Hello, my love,
And my love, Goodbye. 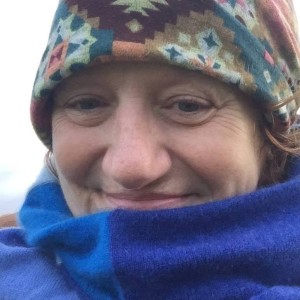 Caroline Bobby is a Psychotherapist & Writer. She lives in London with Leonard The Dog, and Bebe the 3-legged cat.
Show Comments Hide Comments

A Breath Before Sixty