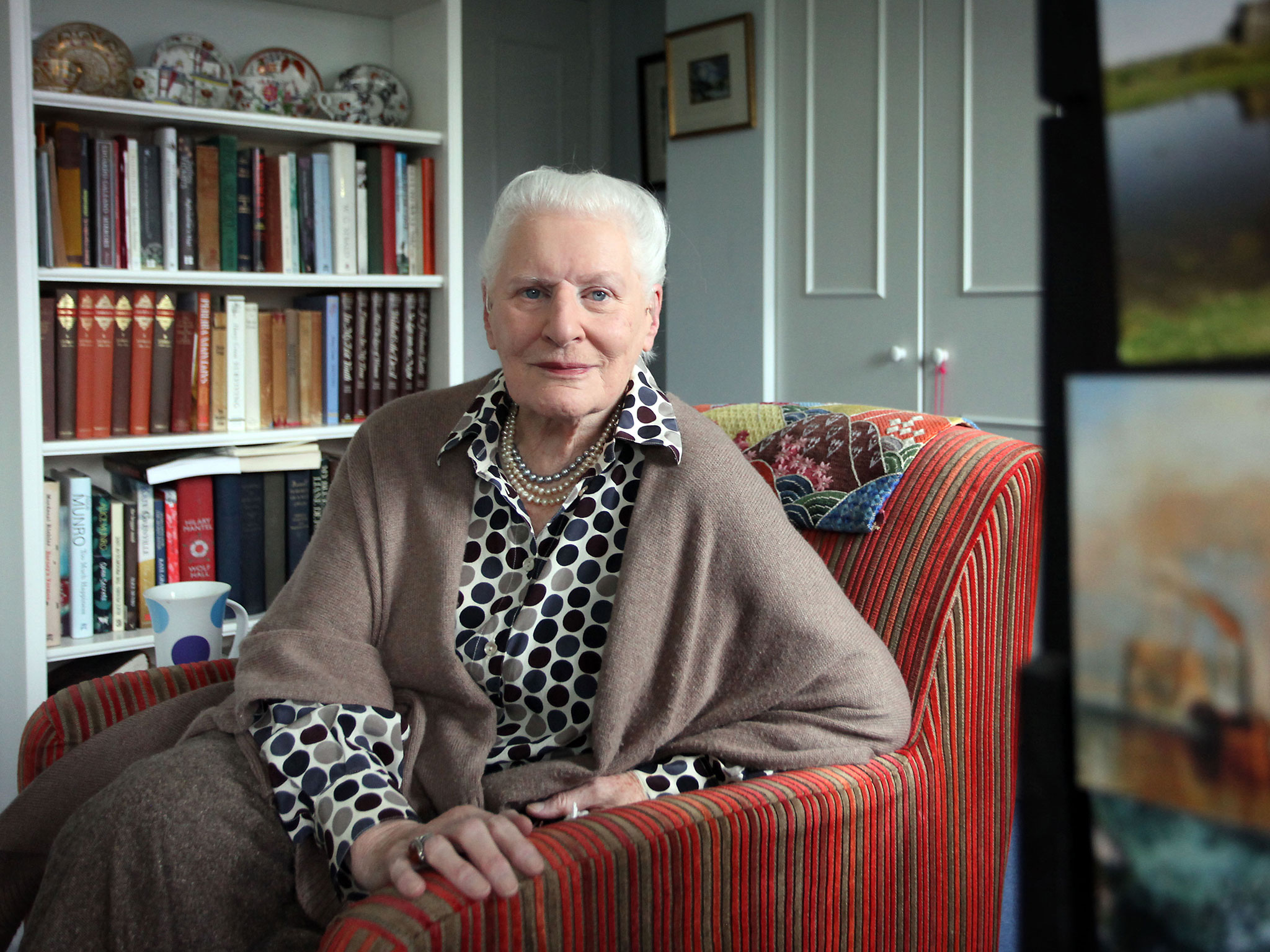 Our 55 year old friend is hosting us (two New Yorkers) in London for a week. To get us out of her house while she was “having a shag,” – a well deserved shag, too, I might add, one that had not been available to her for many months – she sent us out to see writer, Diana Athill talk at the Hampstead and Highgate Literary Festival being held at JW3 in Swiss Cottage.

Out came Diana Athill – 99 years old, pioneer of the confessional memoir and subject of the 2009 BBC documentary, Growing Old Disgracefully, tickin’ and kickin’, in a wheelchair, helped out of it and into a seat by her co-presenter, the author Marina Benjamin who has recently published The Middlepause: on turning fifty. Diana was decked out in a reddish tunic and some very nice long necklaces, a pair of glasses perched on her nose, and her whitish-blond head approaching baldness, which was the only thing that seemed old about her despite the wheelchair entrance.

Diana began by saying that the two worst things to believe in or hold dear in life are “romanticism” and “possessiveness,” and that these two things destroy happiness and relationships.

She read a lengthy excerpt from her most recent work, Alive, Alive Oh! in which she described the three major romances in her life. She described a life in which she has been an unselfish, sex-positive, free spirit in her relationships and sexuality. Her mode of living has been and is to embrace the joie de vivre of living each day. 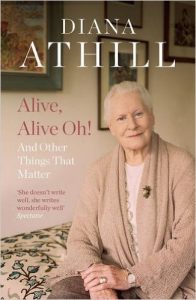 In relationships, she was “most happy being the other woman,” because she got to have the “plums of the relationship and not the pudding.” She explained that the minute she had to do the pudding part (the daily grind of every day life), she lost sexual interest in her partners.

She described a first love, “Tony,” who went off to Egypt and disappeared from her life, because she didn’t want to go with him, leaving Oxford in the final year of her schooling and because “I was having too good a time.” She was “madly in love,” but “Tony” found another girl, during the separation. Diana pined, but then realized that finding a love does not mean that you fall in love “forever,” but rather that life is a succession of loves and experiences.

Someone asked her how to prevent himself from falling into the trap of “romanticism.” Diana said about Tony that she “felt dead without him,” and that every man she dated was more than anything else, “Not Tony,” until she found “Stephen,” who went from “Not being Tony,” to “being Stephen.” She spoke of how so many women think of relationship as the pinnacle of existence, but instead it’s a phase. To her, sexuality, friendships, relationships, interests all change as the phases of life change.

Diana’s early life is straight out of an episode of Downton Abbey: Stephen appeared in her life when her family’s “house in the country” (read estate) was occupied during the Second World War by soldiers on military training. The soldiers encamped on the grounds, and her mother, out of courtesy, invited the captain of the regiment to the house for tea; then, later, to dinner and a dance they were to attend. Diana and Stephen danced all night, and she described the passionate bonding with him: the intensity of their two hands touching, akin to “naked bodies meeting,” and how that portended their lovemaking. She ended up having a torrid affair with him.

It was a love affair, and he was married. But Diana never attached herself to him, even though the relationship was passionate and pleasure-full. She enjoyed it for what it was. In the talk, she mused about what would have happened had she pursued him, and perhaps caused a divorce, and eventually married him. Apparently in civilian life he was a schoolmaster, and she said, “I would have ended up being the wife of a schoolmaster. I would have been bored to death.”

Her most recent relationship was with a South African man named Barry, to whom she was married for 40 years. She explained that she was first his lover, then his friend, and then his caretaker until, mercifully, his younger family members took him back to South Africa to spend his dotage. At that point she was well into her 70s. She’d been having aches and pains that she had attributed to old age, but three weeks after Barry left she discovered the aches and pains were gone. A burden had been lifted! Her phase with Barry was over.

Not long ago she was on a panel, where she described sharing the stage with “one of the ancient Rolling Stones.” She quoted him, and I’ll paraphrase his sentiment here: “People have lived and died for thousands of years before I was born, so what’s the big deal when I do?” “Think about death once a day, every day,” she advised the crowd of mostly middle-aged women and men. “Then you won’t be so afraid of it. It’s the most natural thing in the world.”

Talking about her life now, she said, “When I first moved in to live with old people they seemed old. I thought, ‘I don’t want to live with a bunch of old people!’ But now they’re Hazel and Mabel and whoever. They’re not old people, they’re just people.”

These days Diana spends a good deal of time sitting and reminiscing. Memories flow in and out, she says, and that’s just fine with her. If you are lucky to live long enough, she tells us, things go, and new things come. Each phase has its joys and sorrows: life is an adventure, and the point is to experience the joy of living. That’s it.

I am an unashamed sex goddess, intellectual and native New Yorker. I write to show the world that 50-year-old women, or women of any age, for that matter, are sexual; that all women's sexual fantasies are not about riding a white horse on a beach at sunset. Some of us like it down and dirty, and God doesn't judge us for doing so. I was blessed with wonderful parents, for whom I'm eternally grateful. Because of them, I love and am loved. I thank God/the Goddess for my beloved partner Martin, my family, my friends, and all my lovers, both male and female, over the years.
Show Comments Hide Comments